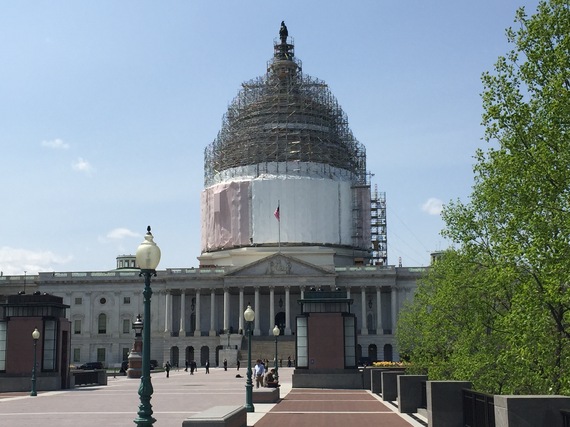 The conservative House Freedom Caucus,
Has given a whole new meaning to "raucous."
They took down Leader McCarthy,
Humiliating the Grand Old Party.

If you accept this small group's word,
Each member just wants to be heard.
They claim they don't have the tools,
The caucus wants fairer rules.

The sad part, you see,
Is they miss the forest for the trees.
Increasing access for the rank and file,
Would be mere tweaks to procedural style.

To genuinely rejigger,
Our vision must be bigger.
It is untrue that all members are fools,
But they're bound by wrong-headed rules.

Rules that foster a flood of money to flow,
Cash kings who give gobs, savvy pros in the know.
"Legalized corruption," a gift exchange economy,
A mockery of democracy, more redolent of oligarchy.

The gerrymandering of districts that rigs our House races,
Winners barely sworn in before their next election chases.
Ideological base voters stretching to the edges,
Divisive issues in primaries, driving partisan wedges.

Two-year terms are archaic in twenty-fifteen,
"Ike" long ago warned of non-stop political preen.
Constant campaigns, full of begging and pander,
And as a result, voters lower their standards.

In the Senate ONE PERSON may grind all gears to a halt,
Leaving the U.S. crumbling, on the verge of default.
Our country was founded upon majority rule,
Now scrapped by Crayola decree, by a Senate pre-school.

And so Freedom Caucus, and others who care,
Dispense with false pretense, and let us prepare.
To empower our leaders 'neath the Capitol dome,
By making bold changes, go big or go home.